Swim for a Reason 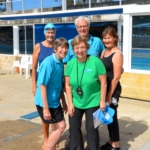 Barry Green and a dedicated and fit group of the Stadium Masters Swimmers held Swim for a Reason on Saturday 6 July at HBF Stadium. These swimmers are not only on top of their exercise regime, they also raised over $5,500 for Alzheimer’s research. Thank you so much for your generosity. We appreciate it very much.

HBF Run for a Reason 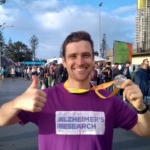 A huge thank you to Jon Burke who completed the Gold Coast Half Marathon on Sunday 7 July and raised over $6,000 for the Foundation! Jon’s father, Noel, is currently suffering from Alzheimer’s disease and is the main reason Jon
decided to enter the Marathon to raise much needed funds to help support further research by the Australian Alzheimer’s Research Foundation. Thank you Jon!

Universal Pictures and the Australian Alzheimer’s Research Foundation hosted a preview of Palm Beach on Saturday 27 July at Windsor Cinema.

Screen legend Bryan Brown joined us to talk about his role as our Ambassador and delved into the reasons for making his latest film Palm Beach.
Thank you Bryan for your generosity and for everyone who came along and made the day such as success.